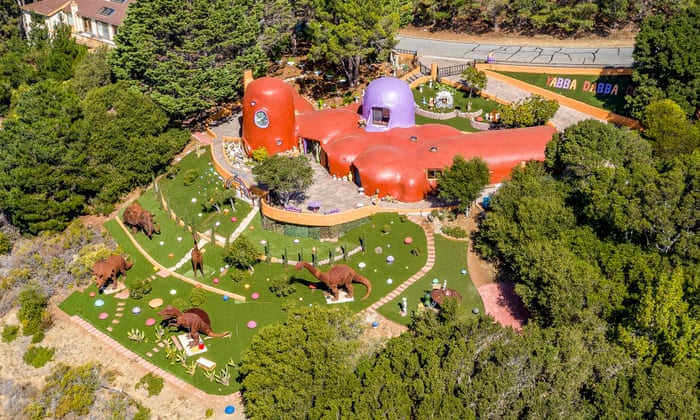 California architecture has captured the world’s imagination with its classic midcentury bungalows and beach houses. But one architectural landmark in the state has gone a distinctively different route, and it’s not to the town’s liking.

The “Flintstones” home in northern California appears to take its architectural cues from the town of Bedrock. The experimental house was built in the 1970s using a technique that involved spraying concrete to create curved walls. The result is a building where Fred and Wilma would feel at home, and it has become a landmark for drivers passing on I-280.

The home is located in the upscale town of Hillsborough, which has a unique architectural history of its own. It’s the site of a Frank Lloyd Wright house where the celebrated real estate developer Joseph Eichler once rented. Inspired by the home, Eichler went on to help popularize the mid-century modern style; his California homes have become icons of the movement.

It has long been a thorn in the eye of local residents, and the decorating taste of Florence Fang, who bought the home in 2017, hasn’t exactly helped the house gain popularity.

Fang is responsible for big metal dinosaurs and Flintstones figurines dotting the property. She also installed a deck, a parking strip and, in a particularly subtle move, an enthusiastic sign proclaiming: “Yabba-dabba-doo.”

While some might argue she is simply honoring the legacy of a beloved cartoon family, the town disagrees. Fang is facing a lawsuit arguing that the home, whose hilltop position makes it hard for passersby to miss, has become a public nuisance. According to the suit, Fang’s improvements were made largely without permits.

The suit says Fang has been asked to halt her work multiple times, with officials calling it “a highly visible eyesore and are out of keeping with community standards”.

Fang paid a $200 fine last year, the local Daily Journal newspaper reported, but has failed to dismantle her dinosaur collection. In a statement seen by the Associated Press, her grandson said: “I think the dinosaurs are beautiful. They make everyone smile and should stay.”

If town officials get their way, the Flintstone house could end up a little less Bedrockian – suffering a similar fate to that of the Simpsons house in Henderson, Nevada, modeled after 742 Evergreen Terrace. Once a colorful replica of Homer’s home, it now it looks like any other suburban building. But as an inquisitive visitor found, the house can’t escape its history: as paint chips away on the garage, a layer of bright orange is visible underneath.

View the full article here at The Guardian