Blink and you’ll miss this slender North Portland house. When the owners wanted to downsize from their three-bedroom bungalow—without leaving their beloved neighborhood—they eyed the empty lot next door. It wasn’t really wide enough to build a house like the one they had, but what if you didn’t need a traditional home?

Completed last October, the new 1,550-square-foot “skinny” house is exactly that: long and deep, with a Z-shaped cross-section to break up space without adding walls. Zoning code is restrictive on skinny houses, explains lead designer Diana Moosman of MWA Architects, with a maximum height topping out at 24 feet, or roughly two stories. Moosman maximized space for the Reids’ house by stacking two floors atop a sunken basement, which doubles as a guest room (with a built-in Murphy bed), laundry area, and yoga workout space. A short, seven-foot-wide staircase splits the ground floor into the kitchen and living areas. To keep a sense of privacy with maximum light exposure, Moosman added a high window above the living room and made the sides mostly solid, with a few tall windows staggered so they aren’t facing the neighbors’ windows.

“It feels bigger than their old house because there aren’t as many interior walls,” says Moosman. She adds that the skinny house principle is perfect for adding living spaces without demolishing existing homes. (The owners still own the bungalow next door.) “There’s a way to create more density without just having a townhouse. Skinny houses don’t encourage demolition. Townhouses do.”

In a city where many houses built on narrow lots greet the street with nothing but a garage door and a front door, an unexpected feature is the floor-to-ceiling kitchen windows.

“We came up with the idea of the kitchen/dining room being a big farmhouse kitchen that faced the street,” says Moosman. “They’re pretty introverted folks, but I warned them, [this] is going to turn you into a party house. And sure enough, it’s made them more social people.” 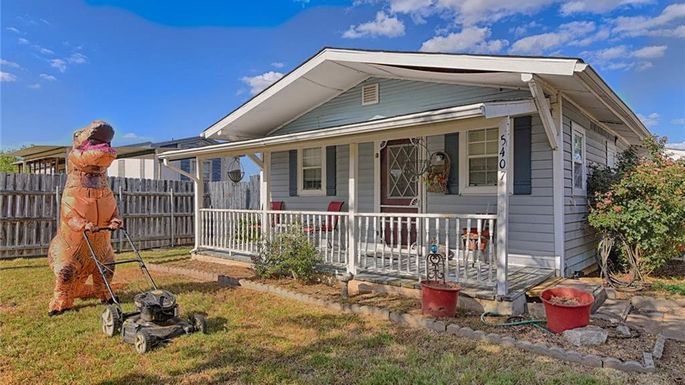 Remember the real estate agent who dressed up in a panda suit to try and sell a home in Spring, TX? It worked like a charm, and got her 12 showings in the first two days. You can’t argue with that kind of success.

But you can move up the food chain. The real estate agent selling this two-bedroom, one-bathroom lake house in Granbury, TX, has hired an extra straight from the Cretaceous era to help out with the listing photos: a giant T. Rex. 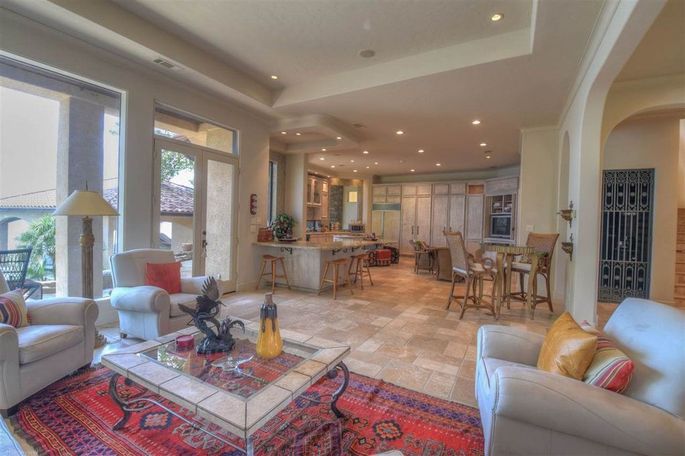 Among the lovely shots of hardwood floors, lake views, and a screened-in patio, we see ol’ Tyrannosaurus raiding the fridge, taking a nap, fishing in the lake, and even mowing the grass. That’s pretty impressive for a guy with such tiny arms, no? 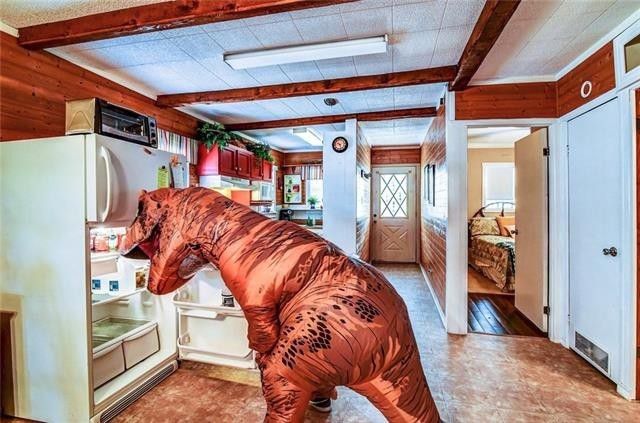 “We came up with the idea a few years ago and have been waiting for the right client and right house to try it,” explains listing agent Casey Lewis. “It was a great way to get extra exposure to an already great property.”

Quite apart from filling in as a Jurassic Park testing facility, the 796-square-foot house has a fireplace, two porches, and a deck, and access to a community boat slip around the corner. The asking price was just $89,900.

So did it work? “The reach was amazing,” says Lewis. “The listing has been featured on local news, shared hundreds of times on social media, and I’ve received calls from all over the country asking for information about the property.” 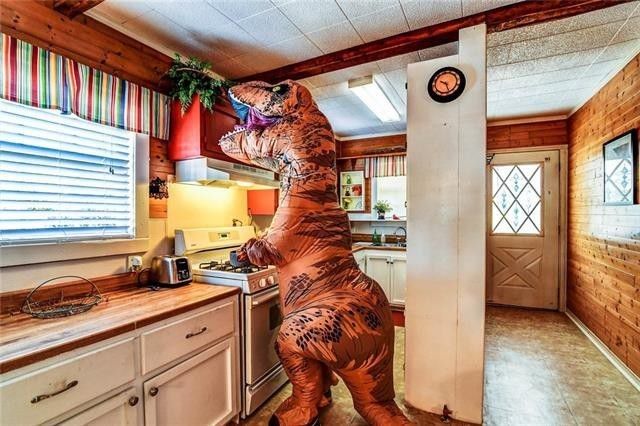 Lewis had over 45 showings, and was in contract within the first two days. It might be a goofy gimmick, but it certainly did the trick. The real question is, why aren’t more real estate agents putting on wacky animal costumes for listing photos? Next time someone tells you they’ll do what it takes to sell your home, send them to the costume shop! 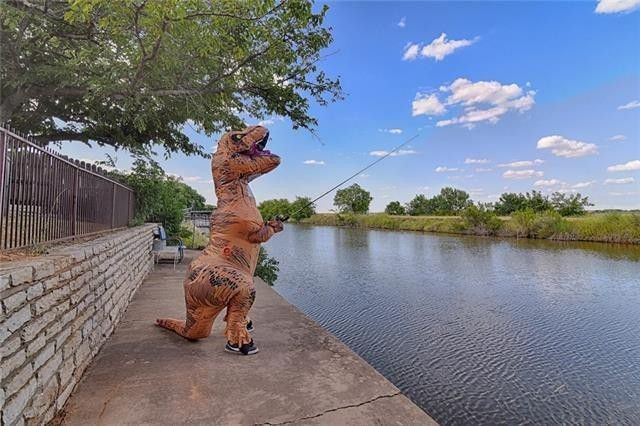 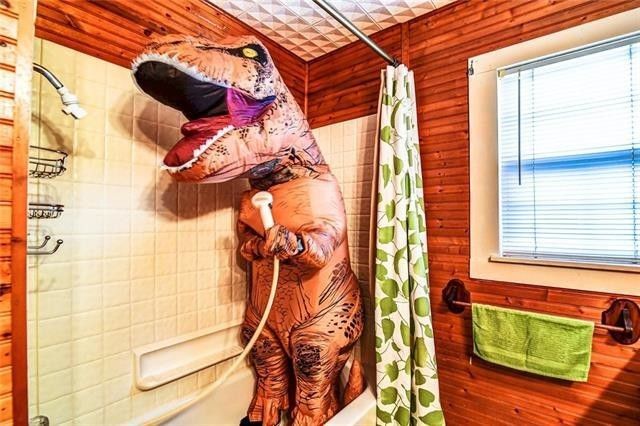 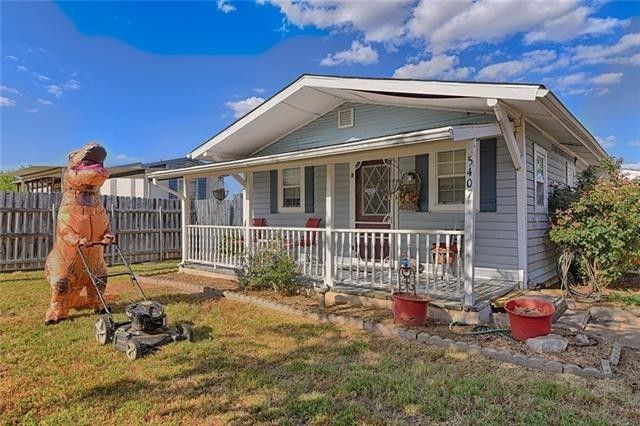 Where affordable housing is scarce, these secondary homes may be the answer. Here’s what you need to know about today’s version of the mother-in-law apartment.

When Jeni Nunn, an agent with Intero Real Estate in Santa Clara, Calif., and her husband bought their 1,270-square-foot house, they planned to use its deep backyard to build a pool or playground. But they switched course when Nunn’s dad and mom (diagnosed with Parkinson’s) couldn’t find an affordable condo nearby. Instead, four years ago, they built a 640-square-foot, wheelchair-accessible, one–bedroom house, with room for their baby grand piano, for $160,000—a bargain in the Bay Area. “For us, it’s the perfect scenario,” says Nunn, who is also a mother of four. “I can send my 3-year-old into the backyard. ‘Go to grandma’s house!’ ”

Nunn’s own build-out put her at the leading edge of the movement to address one of today’s most vexing real estate problems: the need for affordable housing in areas with tight inventory. These secondary residences, known formally as “accessory dwelling units,” have become a popular alternative in high-demand areas of the U.S., from Washington, D.C., to Seattle. And local governments are increasingly passing measures that makes it easier for homeowners to build and rent out ADUs. The homes are permanent, with their own entrance, kitchen, and full bath. “It’s a self-contained dwelling on the same property as a standard single-family home,” explains Martin Brown, a researcher who co-edits AccessoryDwellings.org and rents out an ADU on his Portland, Ore., property. While much attention has been paid to the rise of tiny homes under 400 square feet, the emergence of compact ADUs has been similarly swift, if with less hype.

No one tracks the total number of ADUs, but Kol Peterson, author of Backdoor Revolution, creator of the “Building an ADU” online guide, and co-founder of AccessoryDwellings.org, estimates that the country is home to 25,000 to 100,000 permitted units and several million unpermitted ones. Since California loosened its restrictions in 2016, the number of applications in Los Angeles alone increased from 90 in 2015 to nearly 2,000 in 2017. With permits, cities make sure the units are safe and also capture property tax revenue.

Want to learn more? Here are the answers to common questions about ADUs.

The idea behind accessory dwelling units is hardly new. “It used to be the case that it was quite normal to have someone living above the garage or in the basement,” says Patrick Quinton, CEO of Portland, Ore.–based Dweller, which builds ADUs in a factory so that on-site construction takes only 30 days. In fact, Thomas Jefferson lived in basically an ADU while Monticello was being built, says Eli Spevak, co-founder of AccessoryDwellings.org and an affordable housing developer in Portland, Ore.

So-called mother-in-law units grew at a time when multigenerational living was more common, but in cities like Washington and Philadelphia, people replaced the little home in the back with garages. Interest in ADUs is rising at a time when the average family size has fallen to an all-time low of 2.6 individuals and people have become “overhoused,” says Rachel Ginis, executive director of Lilypad Homes, an education and advocacy group for ADUs in California’s Bay Area. ADUs fall under “in-fill housing”—ways to squeeze more homes into walkable, bikeable high–demand areas. “A third of the population is in one- or two-person households,” says Peterson. “We’re not building the right kind of housing for the population we have right now.”

As ADUs become more prevalent, it’s important to consider how they may affect a transaction. “It’s like looking at a pool,” says Nunn. “There are people who love a pool and will give more money. There are people who [say], ‘I’ll never have a pool’ and see them as an invasion of privacy.” Nunn urges buyers to think about a property’s ADU potential even if it’s not a priority feature. “I encourage my clients to pay attention to the lot size of homes, especially if they have aging parents in the area. Even if they can’t afford to do an ADU immediately, I try to show them the value of having the option to do it in the future.”

What are the secrets to ensuring an accessory dwelling unit is not an eyesore? “A lot of people really take pride in their units,” says David Garcia, policy director of the Terner Center for Housing Innovation at the University of California, Berkeley. “Sometimes they even look nicer than the primary residence.” For example, Kol Peterson and his wife live in an 800-square-foot “dream house” ADU with a king bed, radiant in-floor heating, and a 10-foot movie screen. (They rent out their main house for $3,000 a month, which more than covers the $1,700 mortgage.) Some tips:

Match the main home’s exterior. Cities typically require it, though places like Portland, Ore., and Seattle are relaxing those regulations. “Modern is in right now,” says Valley Home Development’s Steve Vallejos. But it tends to be more expensive and may not fit in as well in some neighborhoods. Many opt for a match to the main house. “Most clients are coming to us with the assumption that the ADU is going to be a miniature version of their existing house.” says Vallejos. Homeowner Lisa Fontes, whose primary house, a colonial, is dark brown with maroon trim, is building the ADU on her Massachusetts property to be lighter brown with maroon trim.

Place windows as high as possible. They let in more light. “Use higher, not just bigger, windows and doors,” says ADU architect Ileana Schinder. “That brings light deeper into the apartment.”

Create open spaces. Avoid hallways. “Why waste square footage?” says Schinder. Put the laundry in the kitchen, and make closets for reaching into rather than walking into. Recess fixtures like medicine cabinets.

In the age of online shopping, Lloyd Center doubles down on entertainment.

Unless you do all your shopping online, there’s a good chance you’ve already noticed the major changes going on at Lloyd Center. So far, renovations at the 58-year-old inner-east-side retail staple have overhauled the indoor ice rink, remodeled the food court, and added that shiny, futuristic spiral staircase.

But the biggest developments are still to come: in the works are a new 14-theater Regal Cinemas, additional retail and restaurants, and a 4,000-seat music venue—speculated to be Portland’s first House of Blues. Dallas-based EB Arrow, Lloyd Center’s current owner, is the developer behind the project.

“Shopping is still important,” says Bob Dye, the mall’s general manager, “just not as important as it was 20 years ago. Entertainment and food are the drivers in this industry.”

An apt symbol of the changes Dye’s talking about, the new cinema will take the place of the former Sears, on the east end of the mall. It’s set to be a “prototype, state-of-the-art facility,” according to Dye, including the sorts of reclining seats you can find at other next-gen local movie houses.

The west end of the mall—former home to Nordstrom—will fill all three floors with new developments. The top floor will house the new music venue, listed on its OLCC license application as “HOB Rose City MH Corp.” (“We’re not talking B-roll, casino-level entertainment. It will be all the major names,” says Dye, “artists who might otherwise be going to the Keller or the Schnitz.”) The exact business that will occupy the second floor of the old Nordstrom is still unannounced, but Dye says we can expect something along the lines of arcade-bar chain Dave and Buster’s. The ground floor will house large, full-service restaurants, with only a smattering of retail.

Ambitious, yes. Meanwhile, the former dead zone around the mall is riding a development boom. The current Regal Cinemas across NE Multnomah Street will be replaced by a “Superblock”—a 1,200-plus-unit apartment complex. In total, Lloyd (the neighborhood association is dropping the “District”) will see about 2,500 new apartment units, not to mention the roughly 25,000 workers who commute to the area. Foot traffic, they say, won’t be a problem.

“In two to five years, I think Lloyd Center will be the dominant retail and lifestyle center in the Portland metro area,” enthuses Dye. “I don’t think anyone’s going to be able to touch us. You’ll be able to walk across the street from your apartment into Lloyd Center.”