For some New Yorkers, being priced out of the city means it’s time to move to the woods.

When Casey Scieszka, a freelance writer, and her husband, Steven Weinberg, a children’s book writer and illustrator, decided to leave Park Slope, Brooklyn, they didn’t consider the New York suburbs, where the yards were too small and the property too pricey. Instead, they moved to a house five miles down a dirt road — in the Catskills.

If you’re surprised to hear that two city-based creatives gave up their urban roots for life in the country, so were their families. Perhaps no one was more shocked than Mr. Weinberg’s grandmother and a friend of hers who once vacationed near the young couple’s new home in West Kill, N.Y. “The Catskills are over,” the friend said with concern.

Mr. Weinberg, 34, politely responded: “But you haven’t been there in 40 years. It’s different now.”

One could say the same for many of the rural hamlets, lush valleys and charming Main Streets of upstate New York: They’re changing, thanks to a wave of city folks moving in. Sure, the hemlock trees are still towering, the mountain ranges still majestic and the streams still rushing, but telecommuting has inspired a new crop of people to move to these sometimes wild, sometimes walkable and sometimes wide-open spaces. Priced out of the city, but armed with the possibility of working at home, some New Yorkers are willing to trade their walk to work for a walk in the woods. 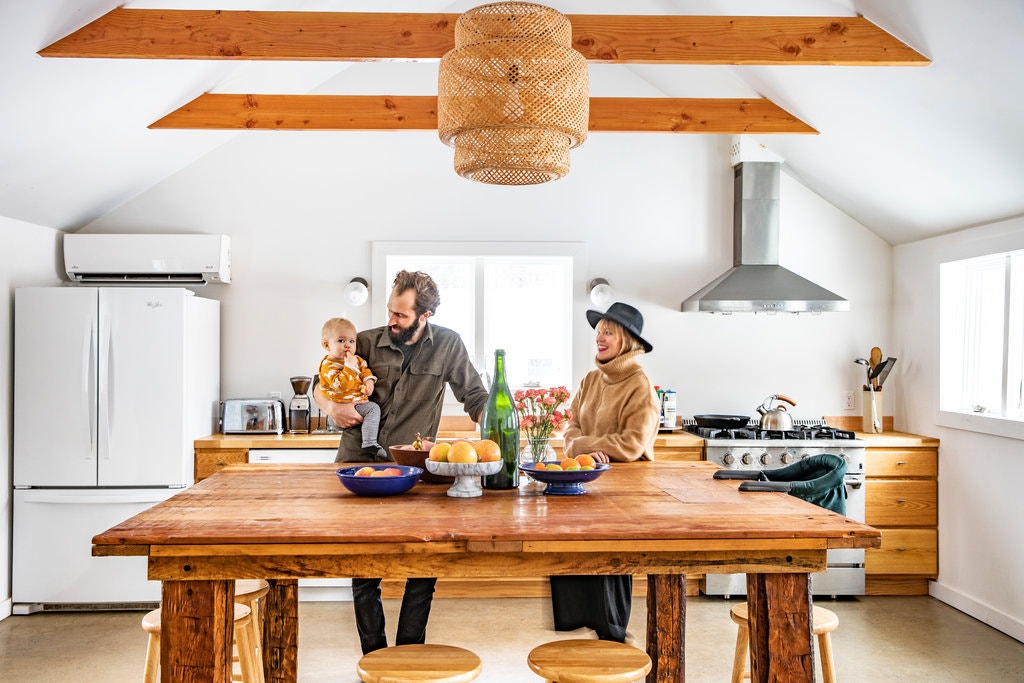 “If you want to live on five acres, that’s never going to happen in the suburbs, so some people are looking farther,” said Jessica Fields, a real estate agent for Compass in Park Slope. In 2014, she founded Beyond Brooklyn, which helps people who want to leave the city figure out where to go.

She and her husband considered moving their family to Ulster County seven years ago — and while that is not entirely off the table, they are staying in Brooklyn for now. “We know so many people who have moved upstate or are curious about moving there. It attracts the people that want to be outside and make their own kombucha, but still want to stay connected to arts and culture.”

A 2018 StreetEasy report showed that when New Yorkers move within the tristate area, 6 percent go to Westchester and Rockland counties, while 12 percent wind up in New York counties north of there. (For comparison’s sake, 9 percent move to Long Island and 13 percent to New Jersey, whether to urban Hudson County or beyond.) Residents of the Bronx and Staten Island are most likely to move upstate (17 percent), followed by Brooklynites (12 percent).

“Ninety percent of my clients up here are from Brooklyn,” said Megan Brenn-White, a real estate agent in Kingston, N.Y., who left a 750-square-foot apartment in Clinton Hill, Brooklyn, that she shared with her husband for an A-frame style house surrounded by woods in Ulster County that they bought for $255,000 in 2016. Ms. Brenn-White markets listings and interesting local businesses on an Instagram account with 6,500 followers, many of them potential or recent transplants from the city.

“Everyone wants the same things: to be within two and a half hours from the city, to have a cute town with a coffee shop less than 10 minutes away,” she said. “Sometimes they’re looking for a weekend house and sometimes — about 20 percent of the time — they’re looking for the reverse: a ‘full-time’ move where they’ll still go a few times a month to the city for work.”

City dwellers are being drawn north, in part, because of affordability. You may live in an apartment in Hudson, N.Y., within walking distance of Basilica Hudson, a former glue factory that now has a busy lineup of concerts, readings and food-related events. Or you may buy a rural farmhouse a quick drive from Beacon, N.Y., with its galleries, restaurants and shops. Either way, you could buy or rent a house for a fraction of what a one-bedroom apartment in the city would cost. Freeing up a chunk of income enables some people to chase their dreams, allowing them to open a business or live the kind of life they might not have been able to in the city.

In 2011, Amanda and Anthony Stromoski, who were living in Park Slope, discovered Kingston while weekending in the Catskills, where they liked to go camping. After wandering Kingston’s sidewalks for a night, and stopping in at the local craft brewery, they fell for the walkable streets and proximity to nature.

They visited several more times over the years and kept Kingston in mind when they were ready to leave Brooklyn. They briefly considered a move to one of the Rivertowns in Westchester, but decided they were ready for a bigger change and wanted to be closer to nature, said Mr. Stromoski, 36.

In 2016, he left his job as an assistant principal at a public high school in Brooklyn, and they bought an 1890 Victorian in Kingston for $311,000. Now they can see mountains from their windows. They made the decision, in part, because they harbored fantasies of opening a bookstore on Main Street.

For a year, Mr. Stromoski worked as a bartender while he and Mrs. Stromoski formulated a business plan. And in 2017, they opened the 2,000-square-foot Rough Draft Bar & Books, just a few blocks from their house. Here, “bibliotenders,” which is what they call their bartenders, will serve you a glass of wine along with a book recommendation; they also offer coffee and pastries from a local artisanal baker. Mr. Stromoski runs the bookstore, while Mrs. Stromoski, a health writer with Meredith, works behind the scenes.

“Opening this kind of business would have been close to impossible in Brooklyn,” Mrs. Stromoski, 36, said. “But here, it was more attainable for us.”

On their first day, one local after another popped in to welcome them, she said: “We feel really lucky to be part of such an amazing community.”

Why You Should Sell Your Home in 2019 He illegally demolished landmark house; now he has to build an exact replic...
Scroll to top