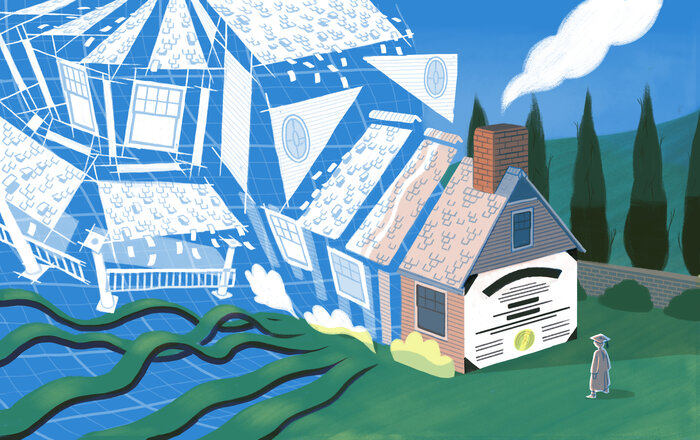 Student loan debt in the United States has more than doubled over the past decade to about $1.5 trillion, and the Federal Reserve now estimates that it is cutting into millennials’ ability to buy homes.

Homeownership rates for people ages 24 to 32 dropped nearly 9 percentage points between 2005 and 2014 — effectively driving down homeownership rates overall. In January, the Fed estimated 20 percent of that decline is attributable to student loan debt.

Whether that will shift with time as the millennial generation marries and has children is the big economic question.

That’s also a big question for Michael McHale, who says as a child, he pictured a suburban, picket-fenced home he eventually wanted to own. “I can remember wanting that since I was 6, 7 or 8,” he says.

But at age 31, McHale isn’t living that dream. Instead, he and his wife rent in Danbury, Conn., an hour’s drive from the elementary school where he teaches, across the state line in New York.

Not owning a home makes him feel he has made a mistake that has kept him short of a key milestone — and his piece of the American dream. McHale says he feels trapped by his and his wife’s combined $1,200 monthly student loan bills, which prevent them from saving enough for a down payment.

And he says renting means he isn’t free to plan his life, even as their first child — a boy — is on the way. One example: decorating the baby’s nursery. “We can’t really make any actual changes. We can’t really paint too much,” McHale says.

“It seems like there’s like a debt spiral or something. When you get into a little bit of it, it just feeds back in on itself, and for us that started with student loans — that was our first debt,” he says.

It feels especially bad when he compares himself with his father’s generation. Neither his father nor his uncles were burdened by student loans. “They all owned a house and had their full-time jobs by the time they were like 21,” McHale says.

Yet many economists say this younger generation will eventually be able to buy — just later than previous generations.

Baby boomers were 25, on average, when they purchased their first homes; millennials, by comparison, are waiting almost a decade longer, Kushi says

Many factors are contributing to this delay: People are staying in school longer, delaying marriage and having children later. This generation is just starting to buy homes, and Kushi expects to see a wave of young buyers in coming years.

“This generation will still yield the wealth benefits from becoming a homeowner, which I think is the key point,” she says.

In the past two years, homeownership rates have increasedlargely because of young buyers, who are benefiting from the good economy, says Jonathan Spader, a researcher at Harvard University’s Joint Center for Housing Studies.

“Student loan debt is still a headwind, but they’re at least being buoyed by stronger incomes and employment,” he says.

People with degrees have higher incomes, which offset the debt burden. But it’s also true that people are taking longer to get their degrees, and many don’t finish school.

“Approximately 40 percent of those who start college do not finish within six years. … That’s a huge number,” says Laurie Goodman, co-director of the Housing Finance Policy Center at the Urban Institute.

For those people, it is the worst of all worlds — they have the school debt without the higher wages to show for it.

Christina Ward did finish her schooling, but her chosen profession in social work doesn’t pay enough for her to overcome her student debt.

“I thought that I would be able to at least make enough money to make the payments, which wasn’t true at all,” she says.

Ward racked up nearly $200,000 in loans for college and graduate school. Then she was laid off in December. At 36, she moved back into her parents’ apartment in Newark, N.J.

“We definitely wanted to get married, and that’s probably going to end up taking priority over the house, because you can’t afford both,” Ward says.

But at the moment, there’s no target date for getting married either.