IF YOU’RE CRUISING AROUND PORTLAND, Oregon, and come across across a six-foot-tall cut-out of Patrick, the pink, portly starfish from SpongeBob SquarePants, chances are good that Mike Bennett left it there for you to find.

For the past few months, Bennett has been busy with plywood, paint, and power tools, speckling his front yard and the city streets with playful, oversized figures. It all started after a snowstorm, when he was noodling over his collection of Calvin and Hobbes books that his parents had recently shipped to him and thinking about a scene where Calvin makes a big snowman. Bennett hadn’t had a front yard in years, and wanted to figure out how to make it fun. What if the delight of some mounded-up snow could last all year, and never run the risk of melting?

He headed to Home Depot, came back with a jigsaw, and went to town on wood from a nearby ReBuilding Center. Bennett, who was once active on the short-video app Vine, where he 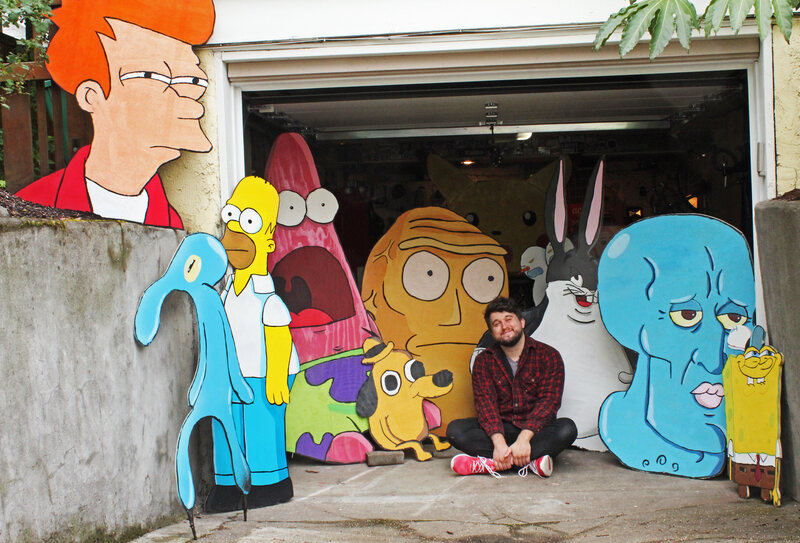 And then he took the show on the road—within reason. “I’m a pretty big baby when it comes to trespassing,” he says, and he’s also careful to avoid damaging property or plants. He’ll sometimes fasten his wooden characters to light posts, trees, or telephone poles with a few hooks and twine. His information is printed on the back of the figures, so if someone gets in touch to say that they want one to come down, he can swing by and grab it. (So far, he says, he hasn’t encountered any issues.) To make it easy to keep an eye on things, he installed them along the routes he tends to follow each day as he drives around for his day job as an assistant for a real estate company. “They’re my babies now,” he says. “I like to check in on them.”

Bennett loves a good scavenger hunt, and invites people to go out looking for the figures he’s scattered around Portland. (He sometimes drops location hints on Twitter, Instagram, or Reddit.) Taking a cue from a geocaching log, he affixed a little form to the back of each one. There, visitors can jot down their name, the date, and a positive thought.

Some of the signs also nod to culture and quirks that are more particular to Portland. The city famously hatched The Simpsonscreator Matt Groening, and some of the show’s characters borrow their names from Portland streets. Bennett decided to play that up by installing a cutout of Homer’s chummy neighbor Ned Flanders on one corner of NE Flanders Street. When he saw the street sign and made the connection, Bennett thought, “What? Come on,” he recalls. It just seemed too perfect to pass up. He’s also setting his sights on slightly more out-there local lore. “Oregon being the way it is, we’re into Sasquatch,” he says. By August, he hopes to make more than a dozen Bigfoot cutouts, each sporting different proportions and fur colors.

In the more immediate future, he’s planning to confetti the city with little cutouts of Diglett, the petite, pink-nosed Pokémon that sticks its head out of the ground. Bennett intends to make a brigade of the little guys—about 100 in all—with scrap wood he’s accumulated from his larger-scale figures. He’ll tamp them into dirt around the city over the course of June. Each creature will be about five inches tall, and anyone who finds one is welcome to adopt it and make their own yard or windowsill a little more wonderfully weird.