PORTLAND—This city that prides itself on being different has been experiencing a problem all too common of late. It used to be unique, people say, a utopia where people could get tattoos and ride their bikes everywhere and just be weird. Portland was so affordable, as the slogan went, that young people went there to retire.

Then the city got “discovered,” people started flocking here, the tech companies came, and Portland became more expensive. Oregon has been the top destination for people to move to for three years in a row, according to United Van Lines.

Companies including Google, eBay, Airbnb, and Amazon have opened outposts here; Simple, an online-banking and consumer-finance company, moved operations here in 2011 after having offices in New York and San Francisco and has grown to more than 300 people. Portland has a great pool of creative employees, Krista Berlincourt, the head of communications, told me, and its relatively easy, low-cost lifestyle makes for happy employees.“We can give people a salary where you have a great life for your kids,” she said. When I visited Simple’s offices in Portland’s Pearl District, they were emptying out: Simple has outgrown its space and, like many people in Portland, is in the process of moving to a different neighborhood.

Now, housing prices are skyrocketing in this city of 600,000, as more people move in and new high-rises and apartment complexes go up. Apartment rents are rising at an annualized rate of 14 percent, one of the largest increases in the country. More than half of the city’s tenants spend more than 30 percent of their income on rent. News stories abound of whole buildings raising their rent by 20 percent or by $500, or more. Evictions have skyrocketed as landlords make room for new residents with bigger salaries.

It’s all the newcomers, some say. They’re driving prices up and they’re pushing long-time residents out. They’re why Portland was determined by Governingmagazine to be the place in the country with the most gentrification over the last decade. 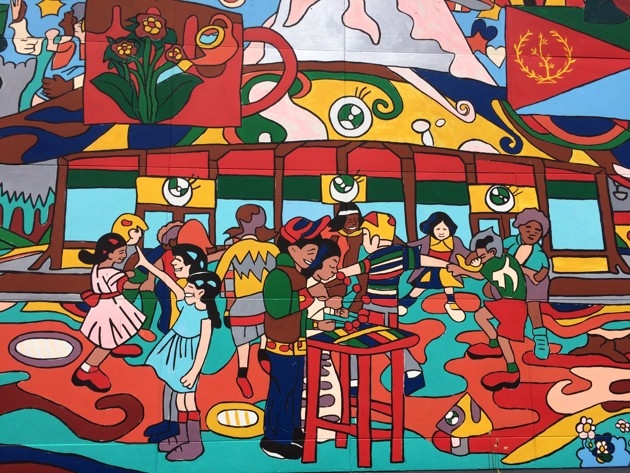 A mural in East Portland highlights the neighborhood’s diversity. (Alana Semuels / The Atlantic)

But that narrative isn’t quite right. Portland prices are skyrocketing, yes. And newcomers are generally the type of people who want to live in the center of the city, near transit and bike lanes, which drives up prices for those areas. But it’s not tech or newcomers that are solely to blame. Portland hasn’t been able to slow its rental crisis because in a city that prides itself on progressivism, many of the traditional tools used to create more affordability are off the table.

“I think that there’s a general sense that Portland is progressive enough to be assumed to be doing the right thing, and that’s not the case,” Cameron Herrington, the anti-displacement coordinator at Living Cully, a coalition of neighborhood groups in Northeast Portland, told me.

Until March, the state banned inclusionary zoning, which mandates that new buildings include a certain number of affordable units. There’s no rent control in Oregon, and efforts to pass just-cause eviction laws have, thus far, been futile. The city has embarked on big urban-renewal projects in the past few decades without putting measures in place to ensure that tenants in those neighborhoods won’t be displaced. In September, the Community Alliance of Tenants, a nonprofit advocacy group, declared a renter state of emergency, asking for a year-long moratorium on no-cause lease terminations, and demanding that tenants receive a year’s notice for rent hikes over 5 percent.

The city has tried to respond. In October, the Portland City Council declared ahousing emergency, focused more on helping the city’s growing homeless population by waiving some city laws to allow the creation of temporary homeless shelters. Later that month, the city council unanimously approved a law that requires landlords to give 90 days notice for no-cause evictions and for rent increases of more than 5 percent. Mayor Charlie Hayes has set aside $20 millionfor affordable housing in North and Northeast Portland. People who have lived in Northeast Portland, which was for decades majority African American, or who have family roots in the area, will get first preference.

In a city that prides itself on progressivism, many of the traditional tools used to create more affordability are off the table.

But there has been pushback on these efforts, too. Many Portlanders say theydon’t want more density in their neighborhoods, that they oppose big housing complexes and in-law units in neighbors’ backyards. (There is a similar attitude evident in some San Francisco residents’ responses to that city’s housing crisis.)  Some neighborhoods are actually trying to downzone to decrease density.

“There are limits to white urban liberalism,” Justin Buri, the executive director of the Community Alliance of Tenants, tells me. “When it comes to housing and schools, all of that goes out the window.”

… Many longtime residents, particularly minorities, are being pushed to east Portland, a neighborhood referred to as “The Numbers” for its high-numbered streets. It can be a 30-minute drive—depending on traffic—and is full of strip malls and poor air quality and fast-food restaurants and other things that seem distinctly un-Portland. Now, people are being pushed out of there, too.

… Neighborhoods that would have traditionally been too far for gentrification are preparing for a flood of new residents, and rising prices. Living Cully, the coalition where Cameron Herrington works, is rushing to create affordability before prices spike. Living Cully is trying to “move as much land and housing out of the system as possible into some kind of community-controlled model,” says Hetherington. Right now, about 14 percent of the land in Cully is shielded from the market in some way, to maintain affordability, twice as much land shielded from development than in the rest of the city, he says. Because Cully is farther out, groups such as Hacienda Community Development Corporation, which is a member of Living Cully, have been able to take advantage of the relatively low land prices by buying land and building affordable housing on it. Habitat for Humanity also acquired land there and is building homes.

They’re also working with other community groups to ensure the city follows through on affordable-housing commitments in a way it didn’t in the past. The group Anti-Displacement PDX meets every other week and tries to make sure policies are in place to protect every neighborhood from the churn that the city experienced in the past.

… The city’s 20-year growth plan anticipates 260,000 new residents will be moving to Portland, largely because, even with housing price spikes, it’s more affordable than San Francisco or Seattle.

Indeed, despite the affordability crunch, companies can still move to Portland and pay their employees well, and ensure that their employees can have a good lifestyle. The median home price in Portland is $345,000; in San Francisco, it’s $1.12 million.

That’s one reason why tech companies like Simple are listening to the debates over affordability and housing, and they want to be cognizant of the changes, Berlincourt said. Companies moved to Portland to avoid the high prices and rat-race lifestyle required in San Francisco and New York. They don’t want Portland to change, either.

The entire article can be found HERE on TheAtlantic.com

This golden West Linn Mansion could be yours for $18mill! Gentrification hits Portland’s elementary schools the hardest
Scroll to top