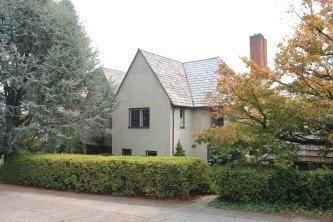 Every building has a story, some are just more interesting than others. Take for example, the latest Oregon properties to be listed in the National Register of Historic Places: The 1915 Fairview City Jail, a concrete building with “ornate” iron cell gates that never really served as a jail, and an 1929 English Arts & Crafts-stylehouse built in Southwest Portland that was once owned by the inventor of theView-Master stereoscope.

Is your house a candidate for the National Register? It may qualify if it’s an important part of American architecture, archaeology or engineering, and is at least 50 years old, although there are exceptions.

“The National Register recognizes buildings, sites and other properties significant to our past for their design, their importance in our history, and/or their association with historical figures,” says Diana J Painter, an architectural historian with the State Historic Preservation Office, which administers the federal Register program in Oregon.

There are 2,038 individually listed Oregon buildings in the National Register, and 267 of those are single family homes in Portland, says Painter.

Otto & Verdell Rutherford House in Portland, was listed Aug. 5, 2015. The 1905 modest bungalow served as a family home and support center for civil rights causes for more than half a century, is believed to be the first historic property in Oregon listed primarily for its association with the Civil Rights Movement. Photo provided by the National Register of Historic Places

Once a house is approved, homeowners can hang up a plaque announcing that their house is on the National Register list. But there are also financial perks and local regulations for having a house listed.

Restrictions vary by local county or city governments. Check with your local planning department to determine the level of regulation in your community.

A federal tax credit program can save owners 20 percent of qualifying costs of rehabilitating income-producing building. Under the Special Assessment program, owners can have the assessed value of the home adjusted. And they can apply for Preserving Oregon grants, which are limited.

The property may also be eligible for waivers of certain code requirements in the interest of preserving its integrity.

Here are the properties that have been listed in the National Register of Historic Places so far in 2016:

The house, with its steep roof, massive brick chimneys and small-pane casement windows, was later occupied by William Gruber, an organ maker, avid photographer and developer of the View-Master.

According to the National Register registration form, the home’s well-preserved, 2,276 square feet of living space includes servant quarters on the ground floor, four bedrooms on the second level, and a basement level that contains a garage, ballroom with a fireplace and canning/kitchen/darkroom area.

The front door leads to a barrel-vaulted vestibule covered in hexagonal terra-cotta tile and an elliptical stair hall with a curved wood staircase and wrought-iron railing. The wood-paneled living room has arch-top French doors and a diamond-pane bay window.

The house was listed in the National Register on May 23.

The 1915 Fairview City Jail museum in Fairview was also listed on May 23. The rectangular, concrete building was constructed seven years after the new city adopted a series of anti-crime and anti-vice measures. The jail was an annex to the 1912 City Hall, which also functioned as a general store, library, post office, dance floor and theater.

After the City Hall was demolished in 1979, the jail stood by itself in city park. The last, original correctional facility remaining in Multnomah County is now amuseum managed by the East County Historical Organization.

The 1918 Arleta Branch Library (Wikman Building) in Portland was listed on March 15. The brick Colonial Revival-style building was designed by Portland architect Folger Johnson and is one of 31 Carnegie libraries built in Oregon, and one of seven built in the Portland area during the 1910s and early 1920s. The architectural style was influenced by Carnegie Corporation guidelines for library design.

Pilot Butte Canal Historic District (Cooley Road–Yeoman Road Segment) in Bend was listed on Feb. 8. The segment has a rough appearance that reflects the use of native materials, and the speed and difficulty in digging the canal, according to the National Register nomination form.

The canal, which spurred development of Bend, Redmond and other central Oregon towns, was the idea of real-estate investor Alexander McClurg Drake who wanted to irrigate lands surrounding the Deschutes River. During the canal’s construction from 1903 to 1905, workers used horse-drawn Fresno Scrapers and steam-powered drills. The basalt floor and sides of the Cooley Road–Yeoman Road Segment still show the tooling marks.

The original article can be found HERE on Oregonlive.com