Named for the shape of the container used to hold salt in colonial times, these homes have a steeply sloped roof that is much longer on one side than the other.

Saltbox houses are common in New England, and back in the 18th century, housed many famous pioneers and patriots, including the second U.S. president, John Adams. Sturdy and understated, they are found by the bushel in historic registers and are very popular today. Read on for a brief history of this quaint architectural style, and why it has such enduring appeal.

A brief history of saltbox houses

Back in colonial times, many saltbox homes started as symmetrical two-story houses, but as families expanded, so did their square footage. One-story additions were built on one side of the home, pulling the original roofline farther down and giving these homes their distinctive asymmetrical shape.

As Lance Abbott Kirley of residential design firm Classic Colonial Homes in Massachusetts notes, “So many aspects of colonial architecture are about symmetry, yet when viewed from the side, the saltbox—with its long rear sloping roofline—challenges that notion.” It’s that distinctive look, Kirley says, that “makes saltbox homes appear more grounded and resilient than all other styles of New England homes of the period.”

Another advantage was that snow could slide down the extended rear roofline, preventing any given part of the roof from carrying too heavy a load. Gavin Townsend, art history professor at University of Tennessee at Chattanooga, adds that feline lovers will be amused (or not) to learn the roof’s nickname: a “cat slide.”

“Because an adventurous feline, finding herself on an icy roof, could slide down the outshot [extended roof] and reach the ground, while suffering damage only to her dignity,” he says.

Saltbox homes also boast plenty of storage space—typically in the cramped triangle of dead space under the extended roof, just above the ground-floor addition. This also provided an additional barrier from the cold, which was appreciated in the days before fiberglass insulation and central heating.

These homes also sport traditional colonial features like narrow clapboard siding, tight-patterned window grilles, a massive center chimney, and understated exterior trim. However, saltbox homes have since evolved to suit a variety of needs and tastes, thanks to their unique blend of practicality and whimsy. Many older saltbox homes have been reworked by design firms to preserve the traditional exterior, but include more contemporary interiors and modern features.

But no matter how they’re modified, saltbox homes remain fashionable because they are classic and practical. Kirley notes that his company’s clients ask for saltbox homes more than any other Colonial style. After all, the saltbox has served American families for over 300 years—why not several hundred more? 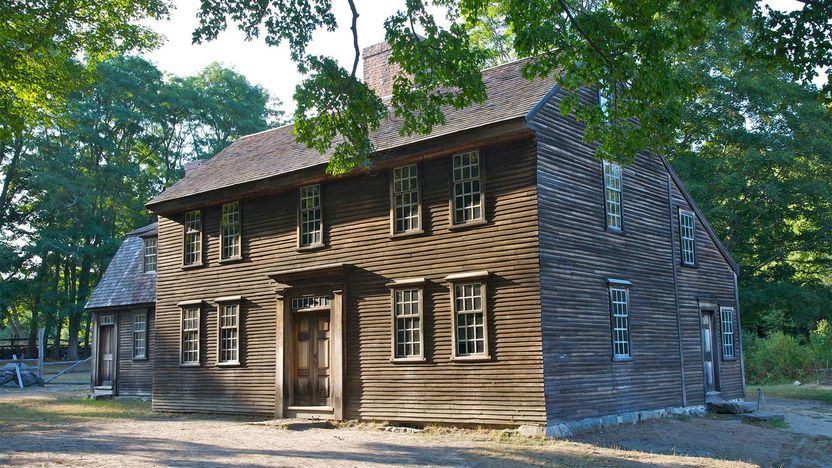 For this and related articles, please visit Realtor.com

Put the ‘Pow’ in Your Powder Room With These 5 Budget-Savvy Décor Idea...For Portland Homeowners and Interior Designers, Wallpaper Is Back
Scroll to top